Coming of age: if the shoe fits

For most of us there are particular points in life that seem to mark the passing of time. It could be turning 18, or 21. Or maybe 25 felt like a more significant age for you. For many, 30 is the point at which you begin to realise you’ve come a long way since school, college or university.

Beyond that there’s that old chestnut… the Big Four O, where – allegedly – life begins.

There are more subtle (and some not so subtle) ways in which the ageing process starts to hit home. Grey hairs, wrinkles, unexplained aches and pains, and so on.

However, if you haven’t got to it yet, you may find the day you start to remind yourself of your parents is actually the point at which you say to yourself, “shit, I’m getting old!”

I think it’s especially common once you become a parent yourself. That’s certainly been the case for me.

It’s rare that I do something that reminds me of my late mother. But there are occasional reactions I’ll have to situations that make me think “that’s exactly what she would have said.”

Sadly, it’s almost never happened in a way that’s made me feel warm and fuzzy.

Like most men, though, it’s the war against turning into my father that keeps me busiest.

He would have been 86 years old today, but he died in January.  He left Ireland in the 1940s, volunteered for the RAF, fought in WWII, settled in Britain, raised a family, and was a manual worker all his life. He wasn’t very well-educated, but he was sharp and had a quick sense of humour. He had a very tough childhood and was one of the hardest men I’ve ever met.

In the last five or six years of his life, I didn’t see much of him. I would get reports on his health and well-being from my siblings, who often lamented that he was losing his grip a little.

It brought to mind something that happened when I was a young boy – my dad would have been in his early 50s I guess.

We lived in Birmingham and despite the fact that during the war he was a driver (among other things) my dad never bought a car – we went everywhere by bus and train.

And so it was one Saturday morning that he, my mother and I set off for Birmingham city centre on some shopping excursion or other.

We walked the 10 minutes or so to the bus stop and waited. We hadn’t been there long when, in that heavy Dublin accent that he had somehow steadfastly held onto, my dad declared, “Christ, would you look at that.”

We followed his gaze and looked down at the ground. He’d left home wearing one black shoe and one brown one. “I wondered why one foot was going tap and the other was going shuffle,” he said.

He made his way back home to sort himself out, while my mother and I were consumed by uproarious laughter.

So, upon hearing my brother or my sister say they thought dad was losing his marbles, my reaction (which I accept to the outside world may seem unfeeling) was to say “he’s been like that for at least 35 years – it’s nothing new.”

Sometimes when I catch sight of myself in a full-length mirror I see my father for a split second out of the corner of my eye. For some reason it happens more if I’m wearing a suit – which I do frequently in my line of work, but he only ever did for weddings, christenings and funerals.

If I stare at my reflection in the shaving mirror long enough and then slowly squint, he appears there too.

And there have been times when I’ve raised my voice in anger only to hear his words coming out of my mouth rather than my own.

The black shoe / brown shoe incident came back to me only a couple of months ago and I started joining some of the dots around all of this and attempting to make sense of the picture that was forming – my relationship with my father, his influence over the man I have grown into, the way I relate to people and the world around me, the way I conduct myself.

For some reason – and this really has been going on for several months now – I’ve had a nagging doubt every now and again that I might, just maybe, have put odd shoes on.

I find myself staring at my feet (it tends to happen mostly when I’m in the car) to see if I’ve actually got a matching pair of shoes on.

I hadn’t connected it with anything. It doesn’t feel like deep in my subconscious there sits a latent fear that I will wear odd shoes just because my dad once did. In much the same way I’ve never thought it was likely I’d wake up one day to find I’d got a job as a scaffolder.

If it’s done anything, maybe it’s made me consider that I’m more like him than I realise – or am prepared to admit. I can accept that I’m like him in many externalised ways: short-fuse, gregarious in the right company, sentimental, musical.

But I’ve never given much thought to what life must have been like inside his head.

Perhaps it was much the same for him as it is for me.

If I’m one step away from anything as a result of all this, perhaps it’s not a footwear faux pas, but an appreciation of the man I spent so many years utterly convinced I would never understand. 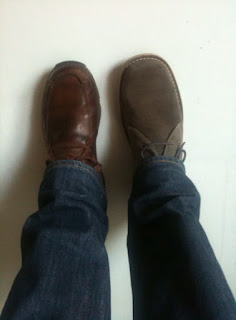 Although originally written in September 2010, before my dad’s death, I didn’t publish this post at the time.
Share