Last week’s wave of social unrest and wide-scale criminality in the UK has opened up the issue of how social media is used to a more mainstream audience than it has previously. Was it part of the problem? Was it part of the solution?
I expressed my opinion on this on twitter: 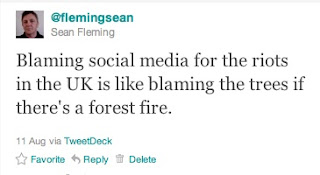 My point being that a forest fire spreads quickly via the trees. The trees aren’t wooden arsonists, merely fuel being somewhat opportunistically used by the fire.
I read on Friday that the San Francisco Bay Area Rapid Transit (BART) rail company had “temporarily interrupted” the service from the following mobile phone companies – Sprint, Verizon, AT&T and T-Mobile. This was done to disrupt a protest which had been planned in the wake of a fatal shooting on 3 July of a man called Charles Hill by the BART police.
According to a report I read on Al Jazeera:
“On Thursday, BART police Lieutenant Andy Alkire told the local Bay City News agency that while it was unusual to block mobile services, it was ‘a great tool to utilise for this specific purpose.’
“Linton Johnson, BART’s spokesman, told the local KTVU television channel that BART ‘didn’t try to shut down the protest. They simply turned off the cell service so it couldn’t become viral. It really is just a cost-benefit analysis of where your freedom of speech begins to threaten the public safety.'”
Fair enough. Up to a point. But I can’t be the only person who thinks that a train company shouldn’t be deciding on where the line is drawn. Can I?
In the early 1990s, when I was a freelance writer and editor, I interviewed a lawyer for a piece I was writing. We talked about how the legal profession was adapting to meet the needs of its clients. The lawyer told me that the fax machine had changed people’s perceptions of how quickly decisions were made – a client sends you a fax that requires a detailed and careful response. But because they know it only took seconds for you to receive it, they expect that response in a similar timeframe.
Jeez. Just think what havoc email and IM must have wrought.
The law (in it’s broadest sense) has always lagged behind innovation.
Cliché alert…. technology is moving so quickly that legislation cannot possibly keep pace.
But surely that’s ok. To an extent.
Wherever you are reading this (I have readers on every continent bar Antarctica you know!
Kneejerk reactions can be the downfall of many a well-intentioned action – whether in the personal or professional sphere. Some have greater consequences than others. It could be a damaged personal relationship, a badly-managed crisis, or even a calamitous piece of legislation.
While it would be foolish to completely dismiss the role of social media in bringing people together around a cause, a one-size-fits-all reaction will do more harm than good.
Share