Here, there and everywhere: rant

I’ve just read a story on the BBC concerning Nokia and a London-based tech startup called Lowdownapp, over the right to the word ‘here’. It’s a great example of people using words in a cavalier manner.

In summary, Lowdownapp have a check-in app that makes it “quick and easy to inform people you’ve arrived at your planned destination” according to a write-up they got in TechCrunch. You do it by hitting the HERE button, seemingly.

Ok, cool. Whatever. I’m not a fan of checking-in via apps; if I want people to know I’ve arrived I’ll probably just tell them using my voice, or maybe by waving at them. I know … old skool. 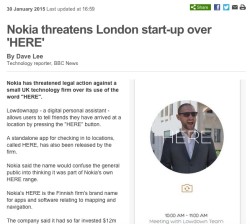 One-time behemoth of the mobile phone world, Nokia object to this use of the word ‘here’ because it has a division that does something map-related which also uses the word ‘here’.

Nokia is apparently threatening Lowdowndirtydogs over the use of the word here because it, Nokia I mean, has ‘invested’ $12 million promoting the Here brand. The piece on the BBC doesn’t say how effective that $12 million investment has been. But I doubt it had garnered coverage quite like that they’ve achieved as a result of this little spat.

The BBC quotes David Senior from Lowdownapp complaining about Nokia being a massive bully: “As a small start-up trying to deliver value to users we don’t think a multi-billion dollar company will be affected by this. Life is hard enough without Goliaths squashing Davids – maybe they should focus on creating a better mapping service than Google or Apple than squishing a minuscule business.”

I find this a little disingenuous, I’m afraid; I’m just not convinced by Mr Senior’s remarks that big-assed companies like Nokia shouldn’t be worried about agile, disruptive, single-feature app startups. Of course they should be concerned.

Tech startups are frequently described as disruptive, a word I have a bit of a semantic problem with. But that’s another story. The incumbent players in any market have been warned repeatedly over the last 5+ years that, unless they watch out, some upstart startup will come along and disrupt all over them from a great height.

Have Nokia over-reacted? Yes, of course. And Mr Senior’s advice that they develop better mapping services rather than throwing their weight around is good advice, too.

But big business shouldn’t be concerned about the threat posed by startups..? Give me a break.