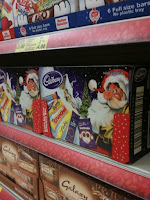 What does Christmas mean to you?

Family? Turkey (no not the country)? Time off work? Mince pies? Mistletoe? Booze?

How about… 25 September? No…? Really? Of all the things that Christmas means to you, 25 September isn’t one of them?

Or at least that was the case until recently – 25 September to be precise – when I was in Tesco.

There I was gamely pushing my trolley round the store, the epitome of the happy shopper, when I encountered not one but two whole aisles of Christmassy-looking stuff.

I did a double-take and inwardly corrected myself for having wrongly identified some predominantly red, green and white boxes and vaguely bauble-shaped banners as something to do with Christmas. An easy mistake to make, I told myself. But a mistake nonetheless.

However, the closer I got the more bauble-like the banner advertising seemed and there, on the seemingly generic red, green and white packaging there appeared to be a jolly-looking fat bloke with a white beard, accompanied by the occasional sprig of holly.

What the fa-la-la-la-laa, I asked myself, and went to inspect.

Yes… Christmas has come early. Three months ahead of schedule, to be exact. Making Halloween and Guy Fawkes look like the laggardly slackers of the calendar they clearly are. I mean, where are they? Nowhere to be seen, that’s where.

Now I’m sure a lot of you will instinctively reach for the “Christmas has been ruined by over-commercialisation” line. And while I’m broadly in agreement with you, I am starting to think there may be more to this than meets the eye, some of which could actually be advantageous.

The silver-lining in all of this for me, from a purely selfish perspective, is that it can only mean I’ll be getting my birthday presents around the end of October instead of waiting until the end January as I’ve always had to do in the past. Assuming, as I am, that the supermarket behemoth has finally grown tired of dominating the retail skyline and has decided to rewrite the calendar.

Easter will, I imagine, quite possibly arrive in February, meaning the Easter Bunny may be in peril of incurring a frost-bitten tail. And other annual events will have to be rearranged too, no doubt.

Mothers Day, Fathers Day – who knows where they might end up. Your wedding anniversary – anyone’s guess.

I know where I hope they stick Valentine’s Day, but I doubt they will – apart from anything else, where I’ve got in mind for it actually has nothing to do with the calendar at all.