Klout, Klout, let it all out

Influence comes in many guises. As a child you will have been influenced by those that raised you – parents, guardians, teachers and so on. When you grow a little older your friends become the biggest influence on you, and in later life influence can come from your colleagues, the people you manage, the people who manage you, your partner. The list goes well beyond that, of course.

By and large, we all know who we are influenced by and to what extent. At least in the realm of the personal.

But identifying who wields influence has lately become a hot topic of considerable proportions in marketing, PR and comms teams the world over. As with most things in life, where there is demand there will surely be supply, and consequently there’s no shortage of people who want to appear to have influence and a growing trade in tools to tell you who has it.

The art critic and columnist Brian Sewell, when asked to comment on class and the English preoccupation with it, said: “You can acquire the trappings, but you can’t buy it.”

Can the same be said of influence? Well, yes and no.

The thing about being influential is that in the main either you are or you’re not. People will read what you write, listen to what you say and click the links you post because they trust you. This is influence.

There’s a whole chapter of a reference book that could be written on paid-for influence, but that’s not what I am concerning myself with here.

If people don’t respond in any of those ways, then – by definition – you lack influence.

However, there are plenty of things you can do to influence the way in which your own influence (can you see what I did there..?) is measured and scored by the likes of Klout, PeerIndex and TweetGrader. Most of these services will even give you tips on how to do it, with some of my favourites coming from PeerIndex who, essentially, advise you to be a person of influence if you want to have a higher rating on PeerIndex. Hard to argue with that logic.

But if you’re after shortcuts to a higher ranking there are a few quick and simple steps you can take. Here are three things you could consider.

Having seen my own Klout score leap by almost 20 points since early June I feel pretty confident that some of this works. Even if I’m not entirely sure I know what I mean by “works” in this context.

I’m not advocating any kind of obsession with one’s online influence score. But the issue of who wields influence online isn’t likely to go away soon, so why not take an interest in the factors that determine the way in which others perceive how influential you are, and the part you can play in it. 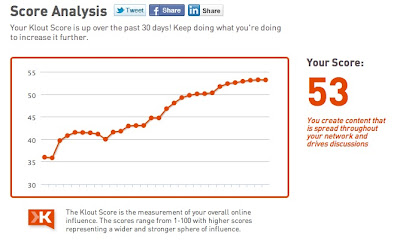