Lunching with the dead, baying for the rope and the wisdom of the crowd

When I was a young man death was my living.

Determined, as I was back then, to eschew a traditional career and focus instead on becoming a professional musician, I took a seemingly endless array of dead-end jobs to pay my way and fund my musical endeavours.

And so it was that I ended up in the late 1980s with one of the most dead-end of dead-end jobs… working in a funeral parlour in Manchester’s Moss Side district.

Unlike some of my colleagues there, I could never bring myself to eat my lunchtime sandwich in the mortician’s workshop, with the recently-departed in various stages of preparation for company. No, I am not exaggerating – that really is how some people spent their break, lunching with the dead.

The business of other people’s loss and grief paid for my leisure time.

Despite what may sound like a disrespectful lunchtime ritual, the people I worked with back then never showed anything other than a complete duty of care to the bereaved and the departed, and they had a highly-tuned sense of the importance of life.

Last week the BBC and many other UK news outlets reported on a website set up by the government designed to give citizens an opportunity to influence future legislation.

It’s a very laudable aim, to attempt to engage the public with politics – let them feel their views will be listened to. But as someone much wiser than me once said, be careful what you wish for.

The site isn’t especially new. But the headline writers’ interest was piqued by the prevalence of pro death penalty petitions on the site. As many as 40 different petitions in total, all worded slightly differently but all asking for the restoration of capital punishment.

I shan’t argue that a truly civilised society doesn’t have the death penalty. For me, this is a personal viewpoint.

From those that want all crimes of murder to be met with a death sentence, to those who only want it applied to child murderers and those who kill police officers. Some call for parliament to conduct a thorough investigation into the possible restoration of the death penalty (it was revoked as the punishment for murder in 1965 and for all other offences in 1998) and others simply said hanging should be brought back.

Small word when said in passing. But stop and think about what it actually involves.

Certain acts of murder do seem to cry out at us as being particularly brutal and unforgiving, whether it’s tortured rape victims, children or scores of innocents caught up in an act of unspeakable barbarity.

It’s not easy to argue against a certain kind of logic that says someone like Anders Breivik, who murdered almost 80 people in Norway on 22 July this year, should be put to death. He is beyond doubt the perpetrator of a terrible act. His guilt or innocence cannot be open to debate, although there are – of course – arguments about his state of mind. Although, from a purely personal perspective, anyone who does what that man did is clearly not in their right mind but I’m not at all sure that ought to be much of a defence.

Whether it’s the gas chamber, a lethal injection or at the end of a rope, the job of administering the death penalty is hardly likely fall to those who clamour for its return. Which, of course, makes it so much easier to adopt a black and white view of these things.

The overwhelming majority of those of us who live in the West don’t have to deal with life and death in a very hands-on way. Thankfully violence, and murder in particular, are statistically rare – long may it stay that way.

That you are here (wherever that may be), reading these words that I wrote one Friday evening in England is a remarkable mix of fate and factors beyond the ken of this simple man. As truly awful as some people’s acts may be I do not feel I have the right to decide who lives and who dies, and frankly I don’t feel you do either. 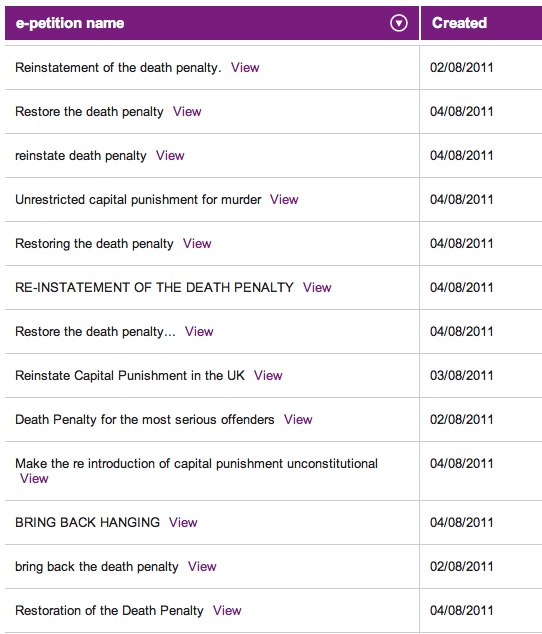