My mother springs to mind

The season of renewal – life, love and happiness.

What does it mean to you? Warm weather for the first time in months. Blossom on the trees. Lambs. Flowers. Easter. Mother’s Day.

A few years ago, while sorting through a box of papers and family memorabilia, I found two cards I had made for my mother when I was perhaps six or seven years old. One was a Mother’s Day card, the other an Easter card.

Both hand-drawn with bits of coloured paper stuck on them, and containing messages written in a small boy’s scrawly handwriting.

My mother died in late spring 1997 and it was a few years after that event that I found these cards – I had no idea she had kept anything from my childhood. 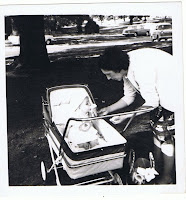 It was, unsurprisingly, an emotional moment for me.

This time of year has been tinged with sadness since my mother’s death.

It’s been the same every year since 1998. But it took me a while to realise what was happening. To spot the pattern.

With one not-so-small exception. I haven’t typically acknowledged it, nor mentioned it to anyone. Instead I’ve just kind of bumbled through until the feeling has left me, snapping at and alienating people along the way.

If you’ve read this far you’ll know what’s eating me next time you find yourself thinking “what’s eating him?”

And I’ll know it’ll be a lot easier on everyone if I face up to it and deal with it, rather than let it dictate how I feel for a couple of difficult weeks.

Life, love and happiness might be a bit of a stretch. But a season of renewal..? I’ll give that a go.