Of statues, castles and spooky apparitions

I took this photo on 8 April 2011. It shows the statue of Queen Victoria, with Windsor Castle in the background.

It’s a popular choice for tourists taking photos of their visit to Windsor. I was on my lunchbreak and – struck by how blue the sky was, and the lack of people in the vicinity – I decided to take some pics.

It was some hours later when I looked at them again, and when I looked I saw something that quite literally made the hairs on my arms stand on end and my scalp tingle.

And not in a good way. 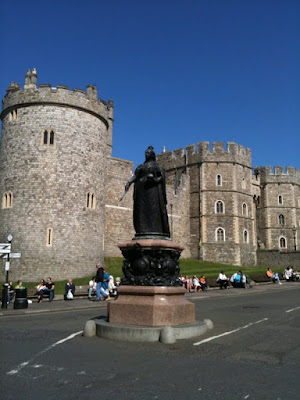 I was standing partly in the road to take this first shot.

In the next one you can see how close I am to the statue – right next to it.

I decided to move close up to the statue, as I’d been standing in the road to take the two previous pics and a car was coming toward me. I stood next to the statue looking at it from a few different angles before taking this shot. When the car had gone I walked back across the road, pausing to take one final shot. In the final pic you can see the figure of a woman standing next to the statue.

She is dressed in a rather unusual, striking manner. The kind of figure I think most people would agree you would notice. Especially if they were stood right in front of you. 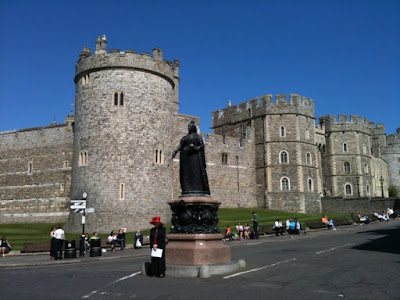 I can’t make you believe what I’m about to write. But when I looked at that pic, a few hours after I had taken it, one thought – and only one thought – ran through my mind… she wasn’t there when I took that photo.

I would have noticed and I definitely wouldn’t have taken it had there been someone else in the frame.

One of the reasons I took those pics is that it is rare to see the statue without people milling around it. The time that elapsed between the close-up and the final shot is literally seconds. Seconds after I had been standing next to the statue examining different angles for an interesting shot.

Surely I would have noticed if there had been someone there.

And how could I have failed to notice someone dressed like that?

Did it freak me out? Yes.

Spook me, put the wind-up, give me the heebeegeebees..? Yes. Yes. Yes.

Perhaps because I (still) feel sure she wasn’t there when I took the photo. And perhaps because the figure in the photo bears more than a passing resemblance to my mother.