Life is a journey.

The detours it takes you on are many and varied, and not always within your power to control.

The death of my father two weeks ago has provided ample opportunity for me to reflect on this and – not surprisingly – where that journey ultimately ends.

His was an inauspicious start in life. Born in Dublin in the 1920s, he grew up in what by today’s standards would be regarded as poverty.

He was denied educational opportunities, faced many hardships, and never knew his father.

At the age of 17 he got on a boat to England, lied about his age and volunteered to fight in the war, joining the RAF.

Like many of the 10,000 or so Irishmen who decided their country’s neutral stance in the fight against Hitler was at odds with their own sense of right and wrong, he struggled to settle in Ireland after the war.

And so it was he settled in England and embarked on a long career as a manual worker.

At the time I was born, he was working in a car factory, liked a drink and the craic, and was still battling with hardship – from workplace racism in the era of IRA terror attacks, to working unsociable shift patterns that kept him permanently exhausted. 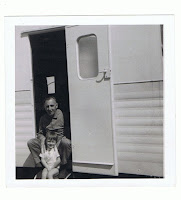 We had just one family holiday, when I was three or four years old. I was young enough to be blind to the stresses and tensions that accompanied that vacation. But I’ve heard about them since. For me it was an exciting car journey, a week in a little metal house, beaches, the sea, and playing.

My earliest memories are of that holiday. Yet it was a never-to-be-repeated event.

After working hard to provide for his family, and (much as it pains me to say it) living in a marriage that didn’t always make him or my late mother happy, he retired as a fit and physically robust man looking forward to a long retirement. Which is what he got – around 20 years of it.

After my mother’s death in the late 1990s, he sold the family home and eventually found the love and companionship of a woman who made him truly happy.

He had money (although not lots of it), love, and a new large extended step-family network. He took holidays, visited interesting places, rediscovered his faith, did the things that made him happy. Truly happy.

My own relationship with him had been strained – practically non-existent in fact – for years.

Thankfully, I saw him not long before he died.

After years of having nothing to do with him, of effectively denying his presence in my life and that of my sons, I felt it was time I took a detour of my own.  So in late December I went to see him during one of his increasingly frequent stays in hospital.

In many ways he was not a complicated man. Seeing me turn up at his bedside made him delighted – he was overjoyed and seeing that uncomplicated sense of joy moved me.

We didn’t make our peace. We didn’t need to. It was unspoken and that was entirely appropriate.

Two weeks later, he was gone.

I didn’t get there in time to say my final goodbye.

The journey was too long. The time, too short.