Dear Tesco, what is the point of this?
I’m referring to the pic of two baby spinach leaves with a speech bubble asking “what am I like?” 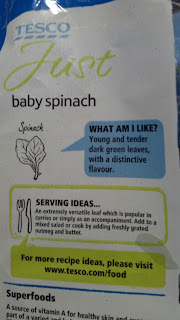 At first glance, and maybe because I lived in Manchester for a time, when I see “what am I like” in my head I hear an annoying voice going “what am I like, eh? I’m just dead mad I am.”
But no, the baby spinach is asking a straight question which is subsequently answered. For this is an attempt to tell anyone who has never tried baby spinach what it’s like.
“Young and tender dark green leaves…” is the first thing we are told. It’s also the first thing I have issue with.
“No shit,” one of the unfiltered voices in my head cries out. Baby anything tends to be young and tender.  And I can see there are dark green leaves, because much of the bag is transparent.
Next we are told the leaves come “.. with a distinctive flavour.”
I see.
A distinctive flavour.
Dog shit has a distinctive flavour (sorry, same unfiltered voice as above). So does toothpaste. Everything that isn’t a compound of other flavours has, by definition, a distinctive flavour.
Describing the flavour as distinctive doesn’t tell me anything useful.
So, what’s the point?
I’m not on some there’s-too-much-informationcrusade. I see this as yet another symptom of marketing departments populated by people with no real clue how to communicate with other people – well, with real people; they probably manage just fine talking utter garbage to other dullard marketing managers.
Anyone in PR will at some point have had to work with one of those people at a client. A mid-to-senior level marketing manager who is only in a position of responsibility because everyone better than them was either made redundant in the post-2008 downturn, or left to do something more rewarding.
These people don’t understand concepts like communicating effectively. They talk almost exclusively in jargon. Can’t cope with being challenged and have no frame of reference outside the impossibly narrow confines of their pointless job and equally uninspiring dimwit colleagues.
They add no value and, by and large, the only skills they have acquired are sufficient political nous to dodge the redundancy bullet and a few knife-wielding chops, but only when people’s backs are turned.
While so much of the tech sector is currently experiencing paroxysms of joy over the incredible talent of our burgeoning start-up communities, the heavier weight tech companies remain bloated by people who were hired during periods of rapid growth and who ought to have been jettisoned long ago.
In case you were wondering, yes I do feel better now thanks.
Share