Two kinds of queue form in the run up to a new launch from Apple.
The first is, of course, fanboyz who cannot wait to be among the very first to own the new iPhone, iPad or iWhatever.
The second is the nay-sayers, typically Android-owners who cannot wait to be among the first to mock said new and shiny Apple hardware. Although it’s generally the software they take issue with.
Thus it was this last week when the iPhone 5 came out and iOS 6 was released.
It’s as dull as it is predictable.
I used an iPhone for about three years and have been an Android user for the past year. Each has their good and bad points – like most things, really.
The ideology underpinning these two platforms is very different though.
There’s an excellent piece about in this GigaOM, which reports on a talk given by RIM’s Sebastian Marineau-Mes last week on the need for curated openness.
Hat-tip to @craigdeakin for tweeting about it and bringing it to my attention.
Apple increasingly reminds me of AOL, something I think I first said in 2010. Surely I ought to have an original thought, but anyway…
Back in the mid 1990s AOL made getting online really uncomplicated and non-confrontational for its users. But the internet they were accessing wasn’t like the internet the rest of us were playing and working in. Eventually the walled-garden, where you were allowed only what your provider wanted you to have (or just the bits they thought you needed) suffered a breach.
In droves, AOL users defected to less tightly-bound online environments. You can track similar patterns in many early online communities and groupings – great at first because they were easy, they failed to keep pace with the changing needs and tastes of their users, who soon outgrew them.
I’m not saying the same thing could happen to Apple.
But that’s only because the main alternative in the mobile world – Android – looks like a cross between ‘Lord of the Flies’ and a food fight in a soft-play centre by comparison with the order and control Apple instills – despite it’s cool counter-culture image, Apple has become the man in recent years. Massive financial success tends to make one want to protect ones interests, after all.
With each new iOS version Apple has seemed, in recent years at any rate, to be clawing back control and I have to admit part of me really admires the slow steady way in which that’s being done. Like so many frogs in pans of gently warming water, iPhone (and iPad) users probably won’t realise they’re being cooked until it’s too late.
Try migrating from iPhone to Android and continuing to carry your music around with you like you used to have it in your iTunes library. Oh hai digital rights management. Now, where did I put my iPod?
At the moment, Google is too busy grafting additional fingers on to its hands so it can make friendly with all the pies. This cannot continue indefinitely.
Once it has reached sufficient critical mass in its key operations, markets and offerings, there will be a move to consolidate what it’s doing. At that point, I wonder if someone at Google will decide its time to stop pissfarting around and offer Apple customers a safe and enticing alternative, with no walls but plenty of garden for everyone.

Footnote:
I got a tweet from Charles Arthur, the technology editor at the Guardian. I was flattered that he’d read my piece. Here it is:

Well, I worried that I may now look a bit of a prat. While it wouldn’t be the first time, it’s not a state-of-being I like having thrust upon me.

To that end, here (below) is a screengrab of the sync history from when I synced my phone and laptop at around 2:30pm. 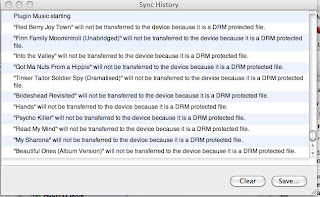 You’ll learn two things from this.

The first is that the term DRM is used and given as a reason for the failure of certain things to sync, thereby mitigating the risk of my looking like the sort of prat who mightn’t know that “apple (sic) hasn’t had DRM on music for years.”

I should stress, I am not arguing with Charles. I am merely drawing your attention to the fact that the piece, which is written purely as opinion not fact, is drawn upon my experiences not my assumptions.  It may well be the case there’s no DRM on music via Apple. Yet it appears here in an error message.

The second thing you’ll learn is there’s right old motley collection of stuff to be found a-lurking in my iTunes library. From “My Sharona” to “Finn Family Moomintroll”, from “Psycho Killer” to “Brideshead Revisited”.

To Charles’s other point, yes there are ways around this stuff, but I think the ease-of-use aspect of my piece was apparent. This piece is a comment on how Apple make it easy for you to stay and (relatively) hard for you to leave – hence the analogy of frogs being slowly cooked. It is not a “How to…” guide, which is just as well really, as I’m sure you’d agree.