When it comes to music, I’m a simple man with simple tastes and simple pleasures. When I listen to a song for the first time and it makes the hairs on my arm stand up before we’ve even reached the chorus, something has gone right. Seriously right. And at that point I want to hear more. That’s how it was with the Cornerstones album ‘Stand In Line’ which I was privileged to get a review copy of prior to it being released. They’re a four-piece band from London (Uxbridge or thereabouts to be more precise, I believe) who are, as yet, unsigned, but are building a loyal following. 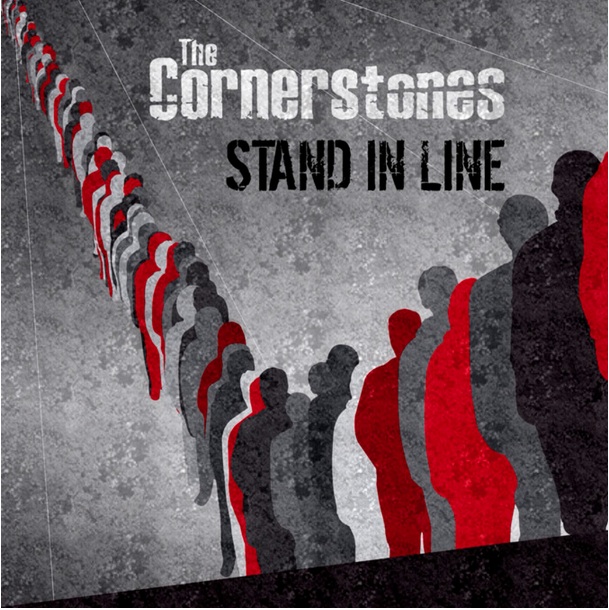 The first song of theirs I heard was ‘Smack Me In The Face’ and I was hooked, like I said, before the song had really got going. For me it remains the stand out track on the album, but it has some pretty fierce competition – there isn’t a weak song on it, in my opinion. ‘Smack Me In The Face’ encapsulates themes that run throughout the album – love, loss, emotional betrayal, a lot of which feels like it has been written from a deeply personal perspective. Yet it manages to avoid sentimentality or clumsiness, making it possible for the listener to empathise and identify with the songs. The words are coupled with some of the greatest melodies I’ve heard from an up-and-coming band. There is some truly great songwriting underpinning this band and it really deserves a wider audience. When I first heard the Cornerstones the immediate musical comparison I made was with Crowded House, a band that can divide opinion. So let me attempt to qualify that comparison. This is no tribute act, no Crowded House sound-a-likey band. But what Neil Finn of Crowded House was exceptional at was writing great songs with haunting melodies and crafting arrangements that never got in the way. Other reviewers have likened the Cornerstones to Oasis, but that comparison doesn’t work for me. Oasis are a blunt instrument. The Cornerstones have layers of complexity and subtlety woven into their sound. Having said that, if you like stuff like Oasis, the Stone Roses, the Smiths (and Johnny Marr’s solo work), Crowded House, you’ll find things you like in the Cornerstones. If you like well written songs I urge you to have a listen and lend your support to a band that could achieve great things. Stand In Line track listing