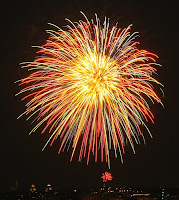 It’s the time of year when firework displays are commonplace in the UK, as part of the traditional 5th November celebration of the evisceration of a group of 17th Century Catholics.

So this evening I went to a firework display.

In the grounds of a hospice.

The smell of hotdogs, the sounds of excited children and crying babies, and the sky – alive with explosions of bejewelled gunpowder.

Cheek-by-jowl with people in the latter stages of terminal cancer.

For many of those there, it was their first ever firework display.

For others, their last.

It gave me pause for thought.

Like a lot of people I can, when so inclined, list my problems, worries and regrets until the cows come home. Things I’ve done and wished I hadn’t. Things I somehow haven’t got round to doing.

It wasn’t my first ever firework display and, unless fate has something in store for me, it won’t be my last.

It seems trite to say things like count your blessings. Or it’s never too late.

But there is more than a grain of authenticity in that outlook.

Staring at a burned bridge won’t get you back where you came from.

The fireworks were impressive.

The evening was humbling.