Last month Ofcom published a survey in which it stated “people are spending twice as much time online compared to 10 years ago” and in one fell swoop revealed itself to be hopelessly out-of-touch. There followed a slew of news stories and blog posts echoing the report and its findings, all repeating the same moribund mantra of ‘time spent online.’

Going online was something we did in the last few years of the 20th Century and the earliest years of this one. You’d sit at your PC, typing in Word or doing ‘what-if’ analysis in Excel, then you’d fire up your modem, listen to the screeching of it connecting with the internet, so that you could go online. Once online, you’d send your email, or browse the internet, then you’d disconnect, and go back to what you were doing.

This is a bit of a man-in-the-pub anecdote, but I heard it just a few weeks before the Ofcom report was announced … a teacher asked his class of 16 year old students how many hours they spend online per day, and his class didn’t understand the question. Why? Were they particularly stupid? No. It’s because the world has moved on and the concept of online has been left behind.

It didn’t say what the other 61% are using their tablets for.

Go around asking people how often they’re online and all you’ll really achieve is letting people know you hail from a bygone era. And not in a cool hipstery way.

That same derelict way of thinking can also be seen in some of the things we try to teach young people at school and college. There are courses, a GCSE history module in particular, that seeks to join the dots between digital & social and magazines, newspapers, periodicals and even all the way back to the evolution of writing … look kids this is how come you got Facebook and WhatsApp, and all the other things that are so cool and useful.

You might as well have tried to teach kids in the 1980s that cavemen building fires were actually using the first ever microwave ovens. It’s just misguided. 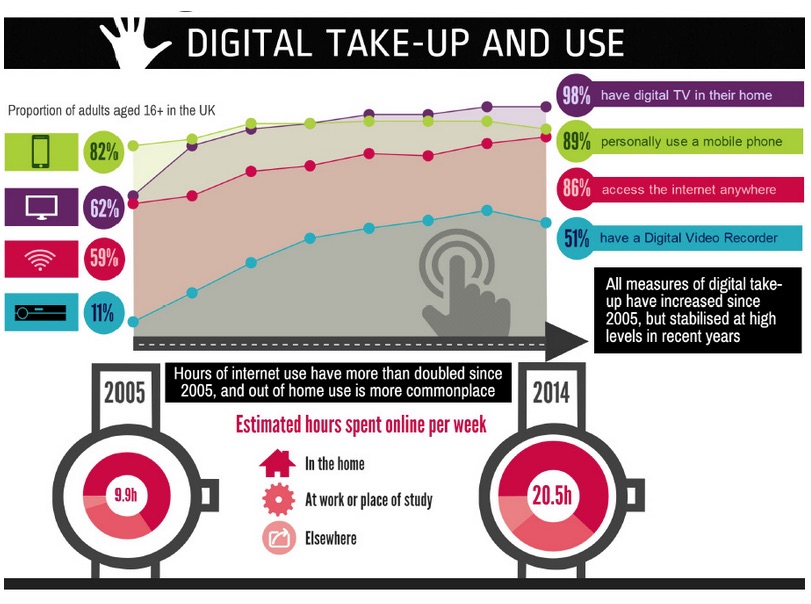